Hugh Marston Hefner was an American magazine publisher, editor, businessman, and playboy. He was best known as the editor-in-chief and publisher of Playboy magazine, which he founded in 1953.FOR THE MULTI GENERATION PLAYBOY HERO LIFE WAS SAID TO HAVE BEEN GOOD BAD STRANGE AND MYTHICAL .DONT TAKE THE GRAPHIC RENDITION OF OLD HEPH THE WRONG WAY .I PURPOSELY DID THIS BECAUSE I RECOGNIZED MR HEFNER FOR THE DEVIL OF A LADIES MAN HE WAS .ONE DEVIL OF A BUSINESS MAN .EVEN IF MY INTENTIONS HAD BEEN TO INSINUATE THE BUNNY GOD ENDED UP IN THE INFERNO IT WOULD BE CANCELLED OUT BY THE FACT HE EXPERIANCED HEAVEN ON EARTH .SO WITH ALL DUE RESPECT MY DEEPEST CONDOLENCES AND ADMIRATION FOR THE DEVILISH PLAYBOY MASTERMIND  HIMSELF MR HUGH HEFNER . 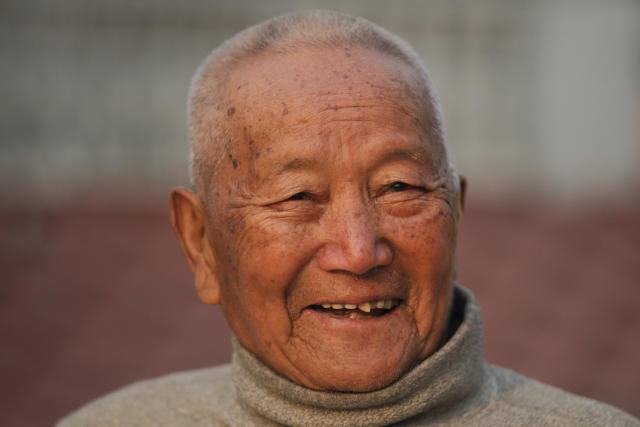 KATHMANDU, Nepal (AP) — An 85-year-old man from Nepal died Saturday while attempting to scale Mount Everest to regain his title as the oldest person to climb the world’s highest peak, officials said.

Min Bahadur Sherchan died at the Everest base camp on Saturday evening but the cause of death was not immediately clear, said Dinesh Bhattarai, chief of Nepal’s Tourism Department.

Mountaineering official Gyanendra Shrestha, who is at the base camp, said the cause was likely cardiac arrest but he could not elaborate due to a poor telephone connection.

Sherchan, a grandfather of 17 and great-grandfather to six, first scaled Everest in May 2008 when he was 76 — at the time becoming the oldest climber to reach the top.

His record was broken in 2013 by 80-year-old Japanese climber Yuichiro Miura.

Before leaving for the mountain last month, Sherchan told The Associated Press that once he had completed the climb and became famous, he intended to travel to conflict areas to spread a message of peace.

He had trained for months before the attempt, saying that he did not suffer from any respiratory problems and his blood pressure was normal.

Being born in the mountains, he said he had did not have any problems with high altitude or the low levels of oxygen there.

Sherchan’s love of mountaineering began in 1960 when he was assigned by the Nepalese government to be a liaison officer for the Swiss team climbing Mount Dhaulagiri.

He later became an apple farmer and constructed roads and dams before settling down to run hotels in Kathmandu.

OK WELCOME TO THAT POINT IN TIME WHERE YOU SAY BRAVO. YTFILMZ HAS THROWN ITS HAT IN THE VIDEO SCENE MANY OCCASIONS FOR VARIOUS ARTIST BUT NO WITH THIS  PROGRESSION.THIS VIDEO IS A 10 IN THE SENSE THAT TREATMENT VISUALS AND SONG ARE RELEVANT.ITS ABOUT TIME SOMEONE MADE A VIDEO WITH A CONVINCING APPROPRIATE MODEL .IVE ALWAYS BEEN A SUPPORTER OF YT AND WITH WORK LIKE THIS BISHOPDEVILLE.COM WILL CONTINUE SUPPORT .

WELL FOLKS IT OFFICIAL .IVE FOLLOWED THE BUZZ RIDDEN CAREER OF LIL TWATTY (NOT A TYPO PUN INTENDED).ALTHOUGH I HAVE MY PERSONAL DISCOURSE WITH THE STATE OF MODERN DAY MUSIC AT THE HANDS OF THIS MEDIA SENSATION AS I WILL NOT CHANGE MY OVERALL LYRICAL RATING OF THE YOUNG LAD AS AN A+ IN WHACKNESS.HE IS HOW EVER WORKING HIS WAY INTO THE VEINS OF THE MAINSTREAM MARKETING WORLD.LETS FACE IT THIS IS WHAT OUR CHILDREN VIEW AS COOL AND IF YOU Have a son the is between the ages of 11-18 your child may be gay as a result of the main stream agenda.not conspiracy theory rather cuntspiracy theory as the Illuminati brings us lil yachty. and coined here the term “illumiyachty” .

Q, the founder WorldstarHipHop.com, one of the most popular Hip-Hop sites in the world died today (January 24).

Q, born Lee O’Denat, died in his sleep at the age of 43, according to multiple reports.

“My condolences go out to his family. Q was an entrepreneur, a pioneer and all around great guy,” Kevin Black, former President of WorldStarHipHop.com told AllHipHop.com.

The website was founded in 2005, with controversial fight videos, mixtapes, stripper videos and interviews with rappers. https://youtu.be/QHjTf15jQl0

I am thoroughly passionate about spreading love, beauty and inspiration through the work that I do. Recently, I performed at a Rock It Out For Planet Earth event in San Fransisco and sang an original song that I wrote in honor of our planet.My experience as a host started in 2006 when I began hosting bellydance Haflas and talent showcases. I’ve hosted shows for Circus Tribal Bellydance, in Ashland Oregon, where I was the host and entertainment throwing in some humor as well as song. Another show I hosted in Ashland was a Talent Show benefiting the High School’s Choir on a trip to Carnegie Hall. I flew to St. Petersburg, FL and was the musical inspiration for a weekend retreat for women with cancer.I love the camera and I love being a part of projects that are for the greater good and can be an inspiration. I just love art. Alternative, unique expression is something I truly admire and love being a part of. I’m loving to meet people who are passionate about photography, music, dance and theater, and hope to collaborate in a creative, fun way!

E-40 is inventive and entertaining on “The Block Brochure: Welcome To The Soil Parts 4,5 & 6.” But the 45-song set often drags due to formulaic, forced songs.

Unquestionably one of the most prolific, quotable and influential artists to ever come out of the West Coast, E-40 is now officially 20 solo albums deep in the Hip Hop game with his latest outing in The Block Brochure: Welcome To the Soil Parts 4, 5, & 6. And while he’s arguably running neck and neck with Snoop Dogg as the West’s most longevity-laden artist, unlike Snoop, 40 Water hasn’t had to resort to gimmicks, reality television and mainstream media leanings to have a successful catalog that’s over two decades long. Instead, the Vallejo, California emcee has managed to stick to a solid blueprint of palpitating, Bay Area-styled production and his own unmatched vocabulary of slang.

One of the main talents that has set E-40 apart from many of his contemporaries for so long is his distinct ability to find a solid balance between the larger-than-life West Coast persona he’s conveyed on records since the late ‘80s and the everyday people realism that comes naturally to him. On Welcome To The Soil Part 4, that talent is most pronounced on “Got That Line,” which finds 40 combining his greatest asset in his breakneck speed delivery with a pulsating, mob music slice of production, spitting lines like, “Survival tactics, never hustlin’ backwards / Throw off methods why I wear these glasses / So I can look like a nerd, po-po roll right past us, savage ass nigga from the gravel…”  “Bendin Corners” contains some of his most intricate and witty slang on the entire project: “I go ape on a fake if that’s what he want, I’m not a chump / I’m from Vallejo, Cali-Harm-ya, I ain’t no punk / D-boy apparel, candy Camero / Sharp like a arrow, hood like Valero…”

“Bamboo” features a chunky stomp-and-clap backdrop that allows for 40 to get as wordy and raunchy as he pleases, managing to easily squeeze what seems like hundreds of extra syllables into just a few bars. “By Any Means” with Webbie and J. Stalin is one of the bleaker songs on the set in terms of subject matter, but it is strangely overlayed with a somewhat celebratory, danceable beat, containing brief robotic sound effects. It’s proof that E-40 has one of the most inventive and unorthodox ears for production in Hip Hop history. The Chris Brown and T.I.-assisted “Episode” is reminiscent of Rick Ross’s “Diced Pineapples” in its raunchy forwardness, but actually a more entertaining song altogether. And though the Roger & Zapp-inspired “Money On My Mind” comes off as somewhat bland compared to some of the more inventive, risk-taking moments on Part 4, it still succeeds as an attempt at throwback nostalgia.

It’s clear from the majority of Part 4 that E-40 hasn’t lost a step in his 20-plus years of creating and releasing music. Throughout much of this project’s first installment, listeners will hear tons of thick, syrupy sound effects paired with pounding drums—all elements that have been part of 40’s signature sound for the last two decades and have heavily influenced generations of artists from all parts of the map.