SOME OF BAEZA’S PAST SHOWS WITH VALLEY BAY ENT. 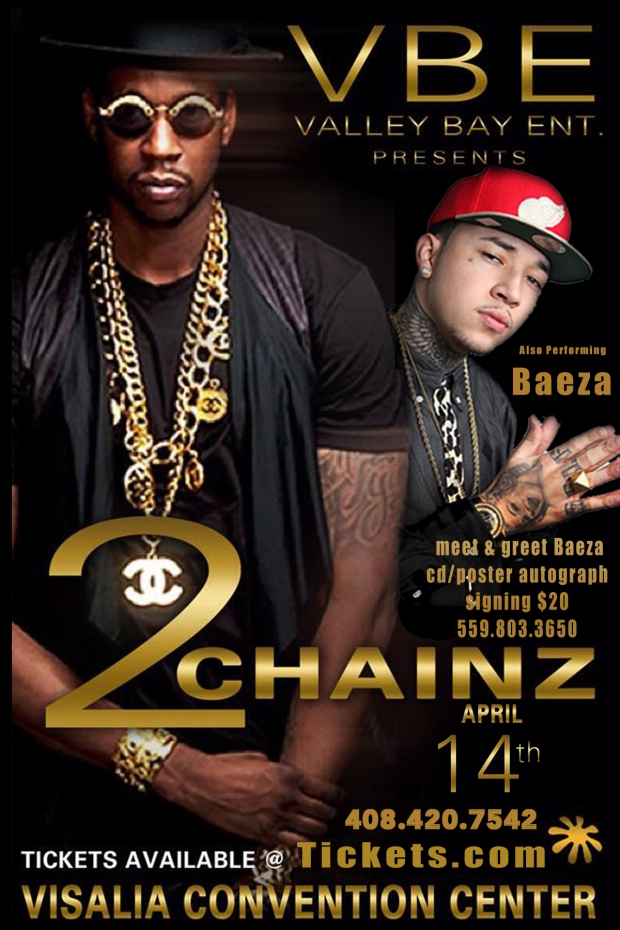 By Joshua Tehee — The Fresno Bee

Anthony Baeza is the kind of handsome young up-and-comer who commands social media hype — the kind that comes with 113,000 Facebook likes and more than 1 million YouTube views. The Fresno rapper, who performs simply as Baeza, will release his first studio album today with a performance at the Veterans Memorial Auditorium. It’s the second installment of a show he did there last year, and it will be his last in the area for a while. The Bee caught up with Baeza to talk about the album, sell-out shows and how fans can keep track of everything he’s doing.

You’re young and already fairly accomplished. How long have you been interested in music and how did you first get involved in hip-hop?

I just turned 20, so I have been doing music for roughly seven years. I started producing as a hobby. I liked my beats so much that I started to rap over them. Around the age of 17, I began to take music seriously, as it grew to be my passion. That was when I realized I wanted to make this my career.

Tell us about “Right on Time.” It’s your first studio album. How does it differ from the types of stuff you’ve released before?

The only project I have released this far has been my “Dough And Dro” mixtape, which helped me get to where I am now — with two major record labels offering me a record deal. I have chosen to hold off on signing to any record labels until I put out my first studio album. Nowadays, I am always on the road, so mixtape projects are normally thrown together with little planning. This is the first project I have sat down and made with a purpose. I recorded it all here in Fresno at Tyme Studios. The quality of this album, from the production, song writing, lyricism and even the sound quality, are all on another level from my mixtape.

According to Twitter, your show at The Catalyst in Santa Cruz was close to selling out. That’s no small feat. How does it feel to have that kind of fan base coming out to support?

It’s always a blessing to see my fans out supporting me. It doesn’t matter if it’s 10 fans or 10,000, I always feel blessed to have a single fan, let alone almost selling out venues. Don’t get me wrong, I did feel as if I have came a long way in two years.

What can people expect from the Memorial Auditorium show?

The people can expect an amazing show. This is the last stop of my Far From Ready tour. I have performed the same set for the past 13 stops around the states, but this one will be a new set, with many surprises. Me and my DJ have been planning a new set to make sure it will be the best stop yet. It only makes sense to do it big for my hometown.

Oh yeah, and the fans in attendance this Friday will get a sneak peek at almost half the songs off my new album.

What else should people know?

Follow me on Twitter and Instagram @OfficialBaeza. That’s where you can keep up to date with what I have going on. Also, be on the lookout for the first single off my album. The single is the remix, or part two, to one of my most successful songs, “Slip N Slide.”

Know a local band or musician more people should be familiar with? Send details to Joshua Tehee, jtehee@fresnobee.com or @Joshuatehee on Twitter