He wrote and directed the first ‘Nightmare on Elm Street’ film, helmed the first four ‘Scream’ movies and guided Meryl Steep to an Oscar nom in ‘Music of the Heart.’

Craven was a longtime summer resident of Martha’s Vineyard, where he moved permanently three years ago before returning to L.A. for work and health reasons.

Craven claimed to have gotten the idea for Elm Street from living next to a cemetery on a street of that name in the suburbs of Cleveland. The five Nightmare on Elm Street films were released from 1984-89 and drew big crowds.

Similarly, Craven’s Scream series was a box-office sensation. In those scare-’em-ups, he spoofed the teen horror genre and frequently referenced other horror movies.

Craven’s first feature film was The Last House on the Left, which he wrote, directed and edited in 1972. A rape-revenge movie, it appalled some viewers but generated big box office. Next came another film he wrote and helmed, The Hills Have Eyes (1977).

Craven re-invented the youth horror genre in 1984 with the classic A Nightmare on Elm Street, which he wrote and directed.
He conceived and co-wrote Elm Street III as well, and then after not being involved with other sequels, deconstructed the genre a decade after the original, writing and directing Wes Craven’s New Nightmare, which was nominated for best feature at the 1995 Spirit Awards.
His own Nightmare players, Robert Englund, Heather Langenkamp and John Saxon, played themselves in that film.
In 1996, Craven reached a new level of success with the release of Scream. The film grossed more than $100 million domestically, as did Scream 2 (1997).
Between Scream 2 and Scream 3, Craven, offered the opportunity to direct a non-genre film for Miramax, helmed Music of the Heart (1999), a film that earned Meryl Streep an Academy Award nomination for best actress in the inspirational drama about a teacher in Harlem.

“We had a very difficult time getting an audience into a theater on my name,” he said in an interview with writer-director Mick Garris in October. “In fact, we moved toward downplaying my name a lot on Music of the Heart. The more famous you are for making kinds of outrageous scary films, the crossover audience will say, ‘I don’t think so.’”

Also in 1999, in the midst of directing, he completed his first novel, The Fountain Society, published by Simon & Shuster.
Craven again pushed the genre boundaries with the 2005 psychological thriller Red Eye, starring Rachel McAdams, Cillian Murphy and Brian Cox. And in 2006, he wrote and directed a romantic comedy homage to Oscar Wilde featuring Emily Mortimer and Rufus Sewell as a segment in the French ensemble production Paris Je T’aime.
Craven then produced remakes of The Hills Have Eyes (2006) and The Last House on the Left (2009).
His most recent written and directed film, My Soul to Take (2010), marked his first collaboration with Labunka, who also produced Scream 4.
Craven directed several other thrillers and horror movies during his career, including Swamp Thing (1982), Deadly Friend (1986) and The People Under the Stairs (1991).
Craven had recently signed an overall television deal with Universal Cable Productions and had a number of projects in development, including The People Under the Stairs with Syfy Networks, Disciples with UCP, We Are All Completely Fine with Syfy/UCP, and Sleepers with Federation Entertainment.
He also was executive producing the new Scream series for MTV. The season finale of the series will pay tribute to the writer/director, an MTV spokesperson told The Hollywood Reporter.
Craven had recently written and was to direct the Thou Shalt Not Kill segment for The Weinstein Co.’s Ten Commandments miniseries for WGN America. And he is listed as an executive producer of The Girl in the Photographs, a horror thriller directed by his protege, Nick Simon, that will premiere at the Toronto Film Festival next month.
Wesley Earl Craven was born Aug. 2, 1939, in Cleveland. His father died when he was 5. Raised in a strict Baptist household, he graduated from Wheaton College with degrees in English and psychology, then earned a masters in philosophy and writing from Johns Hopkins.
He briefly taught English at Westminster College and was a humanities professor at Clarkson College, where he served as a disc jockey for the campus radio station.
Craven had an eye for discovering talent. While casting A Nightmare on Elm Street, he discovered Johnny Depp. He cast Sharon Stone in her first starring role, for Deadly Blessing, and he gave Bruce Willis his first featured role in an episode of the 1980s version of The Twilight Zone.
He wed Labunka in 2004, his third marriage. Survivors also include his sister Carol, son Jonathan, daughter Jessica, grandchildren Miles, Max and Myra-Jean and stepdaughter Nina.
Craven was a nature lover and committed bird conservationist, serving as a longtime member of the Audubon California Board of Directors. He penned a monthly column, “Wes Craven’s The Birds,” for Martha’s Vineyard Magazine.
“I come from a blue-collar family, and I’m just glad for the work,” Craven said in his chat with Garris. “I think it is an extraordinary opportunity and gift to be able to make films in general, and to have done it for almost 40 years now is remarkable.
“If I have to do the rest of the films in the [horror] genre, no problem. If I’m going to be a caged bird, I’ll sing the best song I can.
“I can see that I give my audience something. I can see it in their eyes, and they say thank you a lot. You realize you are doing something that means something to people. So shut up and get back to work.” 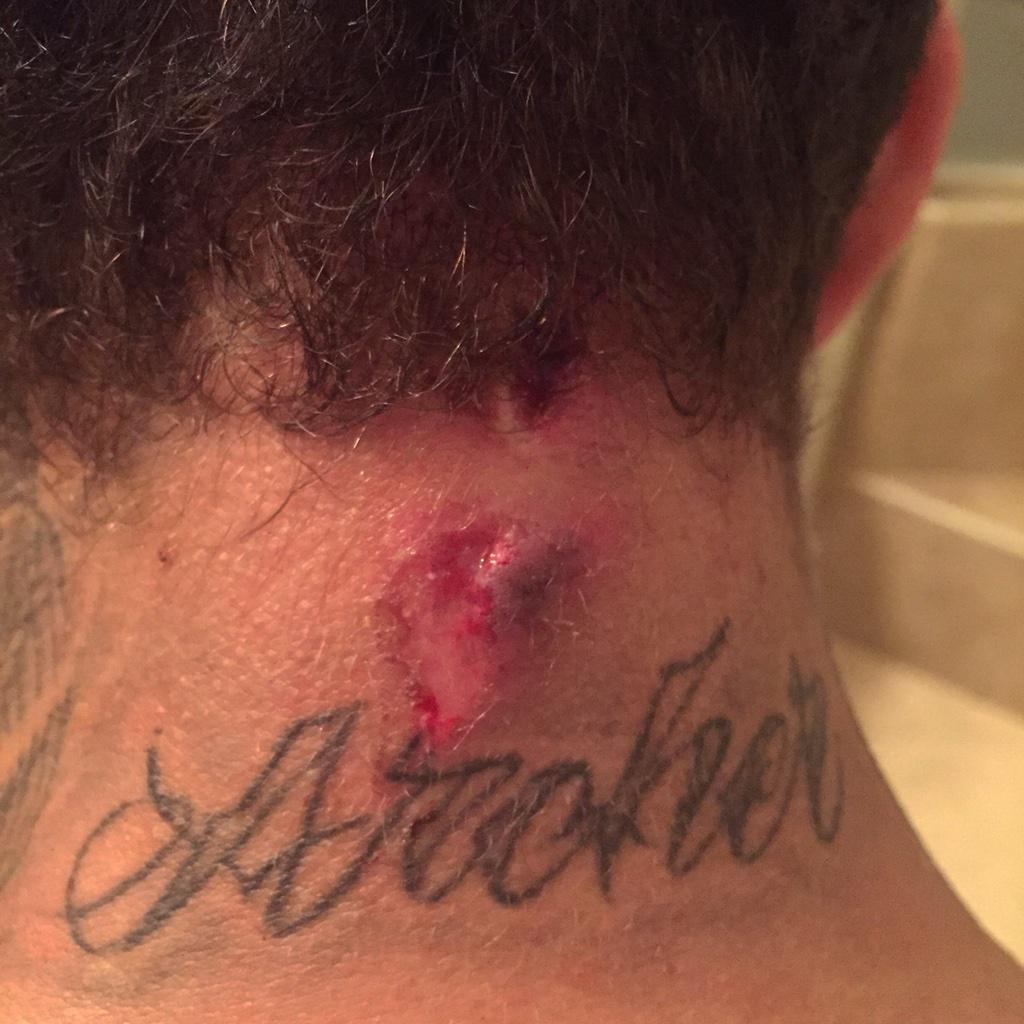 A rap artist driving on a Southern California freeway said something that felt like rocks struck the back of his neck before he realized someone had opened fire on his vehicle.

Rapper Phora was driving with his girlfriend on the 210 Freeway near Pasadena early Tuesday morning when another motorist opened fire. The bullet struck his shoulder and neck.

“I was just stunned,” Phora said. “I didn’t know if it was a gun or somebody was just throwing rocks. I looked over to my left and the windshield was cracked.”

The Orange County-based rapper later posted a picture on Instagram showing his bandaged neck and shoulder. His girlfriend, who called 911, was not injured.

Officials are searching for a car that may be similar to a BMW or Infiniti G35, possibly a four-door, 2009 model. Police said the driver made the right decision to pull over instead of following the attacker’s vehicle.

“They didn’t try to follow the vehicle,” said Lt. Tracey Ibarra, of the Pasadena Police Department. “They immediately exited the freeway to a point of safety.”

No arrests were reported Wednesday morning.

About 650 emergency 911 calls regarding highway violence or road were received by the California Highway Patrol over the past three months. About 350 calls involved someone displaying a weapon, the CHP said.

Last night was one of the scariest nights of my life. Some of you may have heard the news reports, but to clear the air, I was driving down the 210 freeway in Pasadena with my girl, when a silver car pulled up and fired 3 shots into my car. I’m blessed to be alive. Dezy is blessed to be alive. The bullet traveled from my shoulder through to my neck up towards the back of my head. I was shot with a .45, and the bullet was stuck in the back of my head/neck JUST MISSING MY SPINAL CHORD, Vertebrae, etc. where I could’ve been paralyzed for the rest of my life, or even dead. There’s only one explanation: God looking over us. Dezy wasn’t hit. I checked her and made sure she was okay as I was hitting 90 exiting the freeway doing the best I could to get away. I wouldn’t wish this upon ANYONE. I don’t know if I was targeted or it was random, but it saddens me to know there’s people out there that have no remorse and actually have the nerve to try and take a persons life. This was the second time in my life I’ve came close to dieing. It’s not luck. It’s not a coincidence. It’s not a miracle. I have a guardian angel, and gods watching over me. It wasn’t me time to leave when I got stabbed at 15, and it isn’t my time to leave now. God has a plan for me. He has a purpose that I don’t even have any idea of, but I know he’s putting me through this for a reason. My life could have ended that very moment. Your prayers and your strength was with me and possibly even saved my life today. I’m still in pain, still recovering and going through a LOT right now, but I’m grateful to be alive. Grateful to be breathing. Grateful to have one more day on this earth. Tomorrow is never promised. It made me have a different outlook on life. Life’s way too short to be worried about the small things. God has a plan for ALL of us. I believe mine is to make a difference in people’s lives. I stand for what I believe in, I will also fight for the greater good of my people, and I will DIE fighting to change this world. No matter what comes in my way, I will always stand for peace and love, no matter how much hatred and violence they try to bring me down with, they won’t stop me from fighting.

Imagine how he treats haters!

The emcee was runner-up to Dr. Dre‘s “Compton,” which finished first for the second week in a row.

“JFK” was Chinx first official album and landed three months after he died on May 17 from a gunshot wound in his hometown of Queens, NY. The drive-by shooting victim was a member of French Montana’s Coke Boys crew, regularly appearing on mixtapes from the label. The rapper was 31 at the time of his death.

Chinx — real name Lionel Pickens — also came in at No. 87 on the Billboard Artist 100 chart.

“Compton” was tied to the release of biopic “Straight Outta Compton,” which chronicles Dr. Dre‘s time as a member of gangsta rap group N.W.A. “Compton” opened to a big 286,000 copies sold, but dropped by 85 percent in its sophomore week.

Highway 101 in Burlingame was closed in both directions until about 4:30 p.m. Saturday for emergency repairs causing a traffic nightmare. Now it’s slated for closure again on Sunday.

Source: Highway 101 Burlingame To Be Shut Down Sunday Night For More Emergency Repairs Due To Downed Power Lines

A fan died after falling from the upper deck into the lower-level stands at Turner Field on Saturday night. Source: Fan dies after fall from upper deck at Braves vs. Yankees game

Source: Fan dies after fall from upper deck at Braves vs. Yankees game